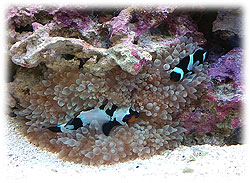 Most, if not all of us in this hobby have clownfish.  When young, these adorable little fish spend their day waiting to be fed and snuggling their best friend, an anemone or coral.  When they get older & become sexually active, that's when their cuteness can turn into little attacking monsters!  Why is this?  Well, they are truly fantastic mommies & daddies and they ferociously protect & defend with their little lives, the area they've selected to make babies.

In many cases, this is your entire tank!  Again, this is natural behavior & one that we can't eliminate so please do not get mad at them.  Rather, appreciate the depth of their commitment to protecting their babies.  Such good Mommies & Daddies!

Another form of aggression we often see is towards new fish introductions into our tanks.  Again, our existing fish have been forced (by us) to adopt our tank as "their home".  Any new fish is quickly checked out, first, I believe, from curiosity then many times changes into a defense action as the new fish is seen as an "intruder" in their house!  The end result is often the new fish being chased & picked on.  If this were happening in the ocean the poor new guy could run away but in our tanks...they may be able to hide but will they ever be able to come out & play?  Most often the answer to this question is yes.  The older fish will usually accept the newcomer IF the newcomer doesn't look too much like themselves or a pecking order was established & peace ensues.  A good way to circumvent this & have a better chance at successful new introductions is to add multiple fish to our tank at the same time...being careful not to add too many at once but still enough to divide the attention.

A final form of aggression (at least for this article) is that towards existing tankmates. I'm talking fish buddies for years then whalla!  All heck breaks loose!  This happened here not long ago when my almost 18 YO Desjardini Sailfin Tang outgrew her 220g reef tank & the end result was severe aggression to her tankmates of 10 years.  She had become the biggest fish, outgrowing in size even her older cousin, my Blonde Naso Tang which is normally known as the King of any tank.  For some time I watched Sailfin expand her fins & display/challenge King but would eventually back down & swim away.  This behavior continued with the challenging becoming more constant then new chasing her tankmates behavior kicked in, so much so that the other fish in the tank didn't want to come out of hiding & even King started to hide!  Not only was this not good for the other fish kids (super stressful on them) but certainly made me sad to know she was so miserable.   This led me to finding her a new home where she could be happy again & her tankmates here could live peaceably once more.

Pictured below, her arrival at the New England Aquarium in Boston.

Every one of us in this awesome hobby of ours will at some point experience one or more of these issues.  It's up too us to identify the cause & remedy it where possible in order to maintain peace, harmony & health in our tanks. 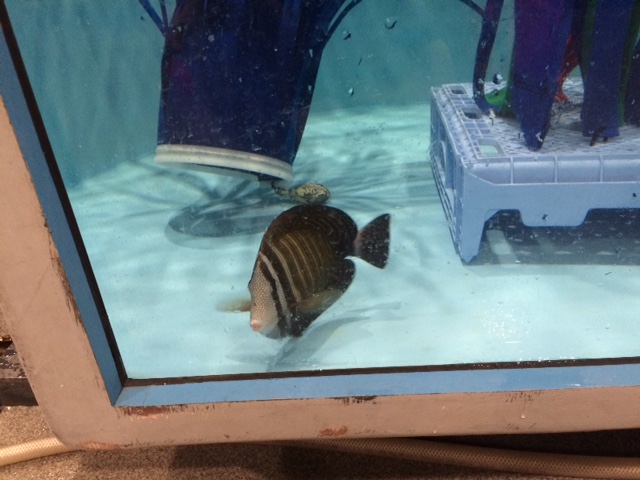